10 years Userlutions – Take a look into our photo album

Birgit Bärnreuther in About Us, About Us
Reading time: 5 Minutes

10 years of Userlutions! On 26.08.2011 Userlutions was registered in the commercial register – we can hardly believe that this has been 10 years ago.

And as we all pack our bags for an anniversary weekend together, we look back at how it all started with Userlutions.

How it all began…

Benjamin Uebel and I got to know each other at the “Kompetenzinitiative Usability”. There we helped small and medium-sized companies in the former GDR federal states with UX services – and noticed how great the need for them was.

However, after the government-funded 5 UX consulting days, it always ended because the companies lacked the budget to pay for our services out of their own pockets.

So we asked ourselves: How can we make usability optimization cheaper, faster and more efficient?
The idea of offering asynchronous, unmoderated usability testing was born. And this later became our tool RapidUsertests.

Shortly afterwards, Mirko Caspar (now CEO of Mister Spex) joined the team. Originally, we only wanted to win him over for a test run with his company back then – he was so enthusiastic about the idea that he wanted to join as a founder directly.
Besides Ben, Mirko and me the team consisted of Sebastian, developer and Freddy, marketing. 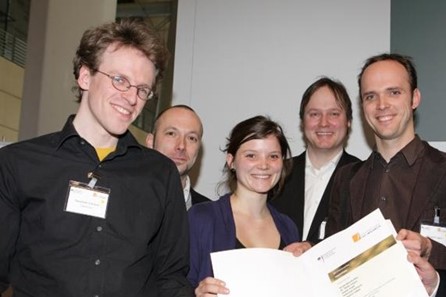 A look at our first offices

The way to our own UX house was still far…

In our first office, we were subtenants, the five of us shared two desks, and we did our first brainstorming sessions on business model, business plan and so on on cardboard boxes instead of whiteboards.

Our first office: Not enough desks and brainstorming on cardboard boxes

However, we did not let these limitations stop us. In this office we did the first tests-RapidUsertests, asked companies about their requirements and iterated a lot.

Even though we were still keeping our head above water with UX services in the beginning, that wasn’t really the long-term plan. At the time, we had every intention of developing RapidUsertests and making the tool work for us 😉 Well, actually… things turned out a bit differently.

First up was the first move – we were still subtenants in our new office, but now we each had our own desk. 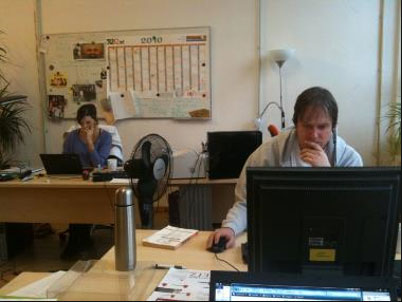 The second office: everyone has their own desk!

All beginnings are difficult…

So everything went smoothly up to this point. We had a business plan, the concept for RapidUsertests was ready, we had a start-up grant in sight and we had already started programming.

But we rejoiced too soon – the application for the start-up funding took months, we had to change professorships and even universities in the middle of it, and by the time this chaos was over, the requirements for the funding had changed, so we had to completely rewrite the application.

Enough time, however, to design logos …

Some of the logo designs for RapidUsertests

…and win some prizes.

The dust settled, we got the grant and we moved into our first office and owned furniture for the first time. And we started hiring people.

After the foundation of Userlutions on August 26, RapidUsertests was launched on September 1.

And then on 02.09.: The first test booking! And from a company with which we had no previous contact. We were blown away!

So our plan seemed to be working – build tool, put your feet up, get rich 😊 .

What we had underestimated, however: How much fun we all had doing UX consulting! On top of that, we learned so much through our consulting projects for the tool and how to improve it. And on the other hand, we were suddenly product managers ourselves, which allowed us to put ourselves in the shoes of our consulting clients even better.

And so the symbiosis of the UX agency Userlutions and the remote UX tool RapidUsertests was born, which is still our model for success.

RapidUsertests clients benefit from our UX focus and the expertise of our now more than 20 UX researchers and designers. And Userlutions customers benefit from the fact that we can offer many services cheaper and faster than other providers thanks to our own tool.

And what’s happened in the last 10 years? Userlutions Milestones

After initially focusing on UX testing and UX research, we started building a UX design department. One of our first UX designers, Claudia Sinnig, is now our Head of Consulting!

The next RapidUsertests milestone: We programmed our own screen recorder and made ourselves independent from external solutions.

After our office was finally bursting at the seams (several people had to share a desk again), it was time for the next move. The new office above the roofs of Berlin with a view of the Fernsehturm served us faithfully for the next 5 years. 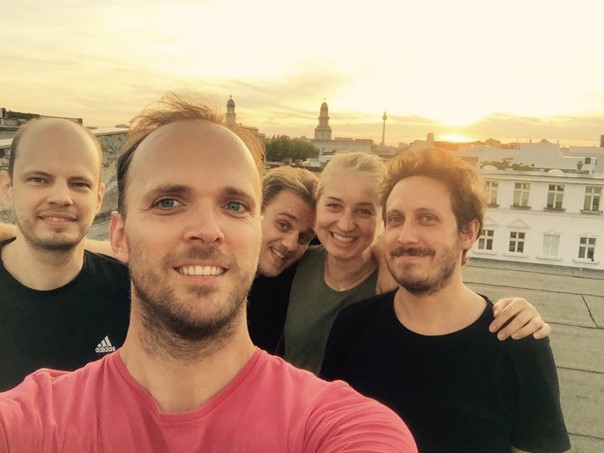 Third office: With a view of the Fernsehturm and Frankfurter Tor

With RapidUsertests we were now able to offer mobile testing, which was a big step forward not only for the tool but also for the agency.

In addition, since 2015, we have successively expanded our marketing and sales departments to continue to outgrow our offices as quickly as possible.

In 2017, we reinvented ourselves and not only redesigned both websites from the ground up, but also gave our corporate design a new coat of paint!

This year we were also able to win our biggest customer to date: Coca-Cola Europacific Partners! Today we look back on four successful years together, which we recently immortalized in a case study.

The next move: This time, no one had to share a desk, but every available square meter of our office was filled with them: There were virtually no more meeting rooms and there were also desks in the kitchen. If you’ve been looking for office space in Berlin in recent years – we know what you’ve been through. It took us almost a year to find a good solution. But then we found the perfect one! As of 13.01.2020, we have an entire house just for us – our beautifully quirky UX house. (Well, at least we had a few more months of it until we had to change to our home offices due to Covid). 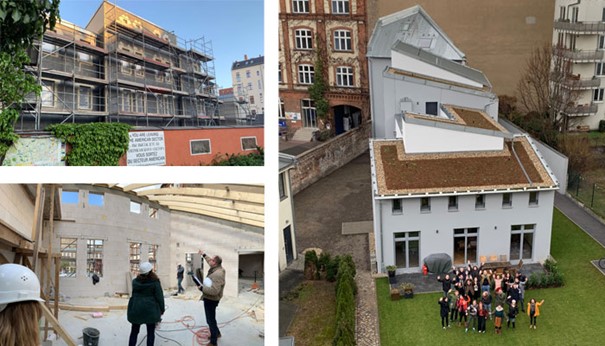 However, thanks to the new moderated remote testing we launched at RapidUsertests in early 2020, both we and our clients could easily implement most UX methodologies from their homes.

10 years of growth without external financing

So a lot has happened in the first 10 years of Userlutions.

By now, we work with over 40 people in a 3-storey house and even my mother has long since stopped worrying that we might run out of work once we have optimized all the websites 😉

I am all the more pleased that we have achieved this organic, healthy growth without external financing!

So where does the Userlutions journey go from here?

10 years ago, nobody knew what usability and user experience were – we had to start completely from scratch in every consultation.

As the words gradually became better known, no one yet knew which methods to use to optimize them.

Gradually the methods became more common, but we still had to do a lot of convincing that UX must also be continuously built into the development processes for long-term success.

In the future, we want to intensively support our customers in approaching UX holistically and continuously.

To make the world a little more user-friendly every day. 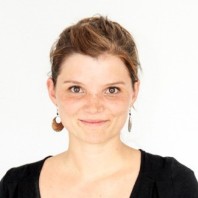 Everything about usability, conversion optimization and website testing - approx. 1 per month, cancelable at any time

About the UX Blog

Welcome to the UX blog of the UX agency Userlutions. Here we write about everything related to user experience, user research methods, conception, interaction design and news from our agency’s everyday life. Enjoy reading!

RSS and Follow us text for social icons (EN)

Haik Dettmann is an interface designer. In addition to designing mobile interfaces, he supports us in analyzing qualitative usability tests. 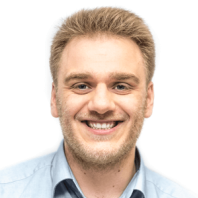 Claudia has been supporting our clients since 2014 in all phases of the Human-Centered Design process, from project planning to final design. She has assisted over 60 of our clients in areas such as industry, B2B software, and e-commerce with UX optimization, including BMW, BOSCH, SIEMENS, and Melitta. 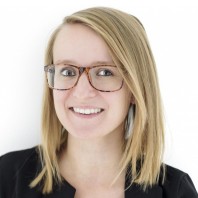 Sophie Krüger studied media communication with a focus on media psychology. She is responsible for our client communications and writes about everything related to the agency 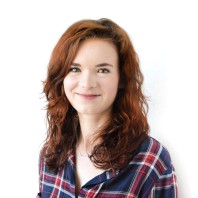 Benjamin Uebel is a psychologist. He is our innovator and drives new developments. He is a speaker at professional conferences and writes professional articles in Website-Boosting, Webselling, i-Com or Gründerszene, among others. In 2008, he founded the first German-language crowdfunding portal. 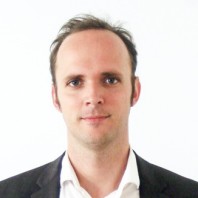 "UX'ers are like guinea pigs: One alone will die." Friederike's constant interest in professional exchange as well as her academic background in human-machine interactions have helped her to work on a wide variety of projects. For example, she created personas for RTL2, HanseMerkur and meinUnterricht.de. 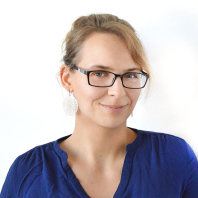 Constanze is a media and communication scientist and has also studied Intercultural Knowledge Communication. Her areas of expertise are qualitative and international usability testing. In the field of account management, she draws on years of project management experience. She has successfully supported numerous international clients, including NOKIA and Zeiss. 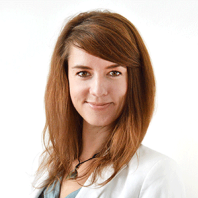 Maria specializes in capturing user needs via user research and design thinking and validating them quantitatively via online surveys and A/B testing. She has worked on over 35 projects for clients in the healthcare, education, insurance, and smart home industries, including Cornelsen, HanseMerkur, IBB, and Velux. 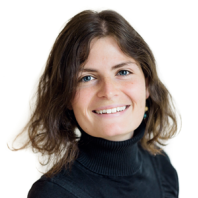 Mareike Mechler studied psychology and communication and supports us in the implementation and further development of our marketing strategy.